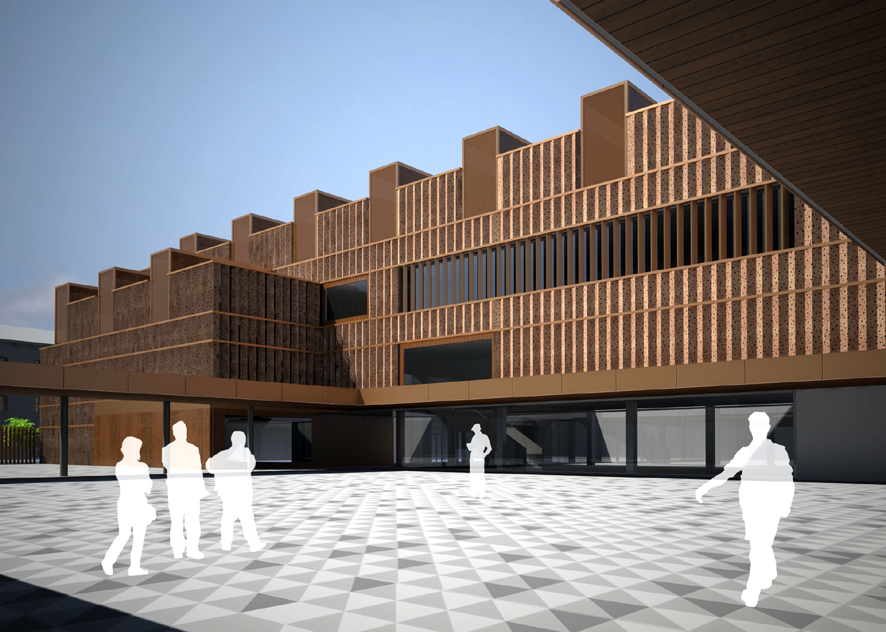 Construction is proposed in the north of the site of a new volume in L, with its two wings perpendicular against the History Center and Library Maria Moliner, and the Municipal Shelter, respectively.

This new volume, forming the northern facade of the Mayor and the Old Cloister, articulates with the existing building in T, with a facade to the street Alonso V, forming between them a plant in U, with three wings of different widths and complexity , which close the new space outside the Civic Centre reception, with access from the street Asalto. The transition space between the existing building and the new volume in L, are occupied by elements of relationship, as the lobby, host outer space, circulation areas and vertical communication elements.

The new volume on L hosts a variety of uses in the ground and first floors, but mainly houses the Municipal Center for Restoration, Rehabilitation and Conservation of Cultural Heritage. If from a holistic intervention seems appropriate that the physical presence of the new construction is defined by a very limited palette of materials, the building housing the program in terms of parts warehouses and workshops of great value property leads us to the idea the building understood as «box» or container.

Configured, so the building as a chest, dense and tight to the outside, with the use of pre-patinated copper matte as the only natural facade material in the form of bent sheet metal or vertical slats in certain areas. Placed on the facades as a folded sheet, which gives depth to the facade, and allows a different perception of the building according to the lighting by time of day and the viewer’s position. Provide scale and some dynamic perception of the facade was a matter to be resolved by the project, since the use of the building carries a very limited number of holes and facade planes essentially opaque.

After defining the performance criteria, the overlap of the new volumes constructed from the existing spaces and buildings, justify removal operations, setbacks and alignments of the new volume, establishing new formal and spatial relationships between the various buildings and spaces of the Convent of San Agustin.