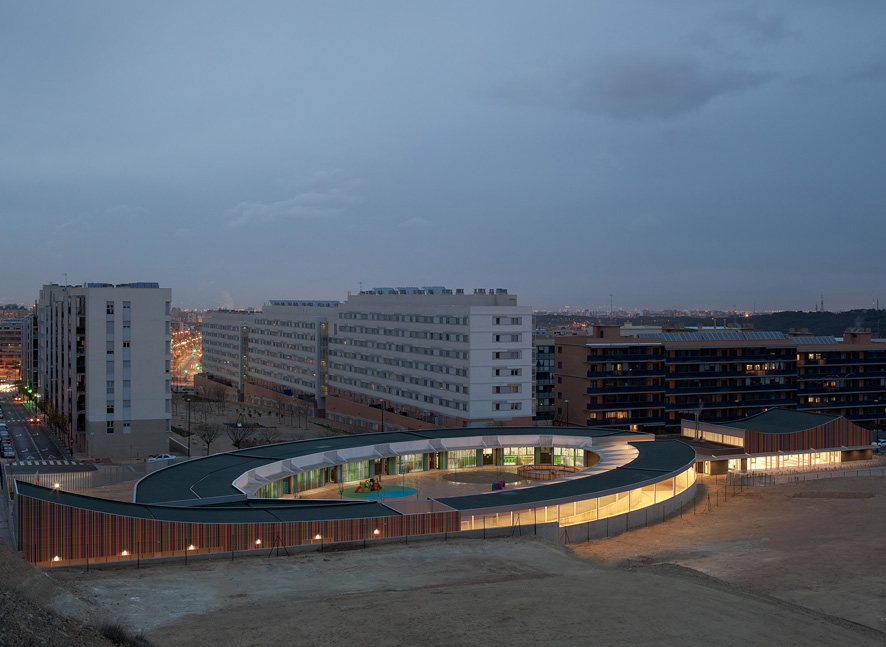 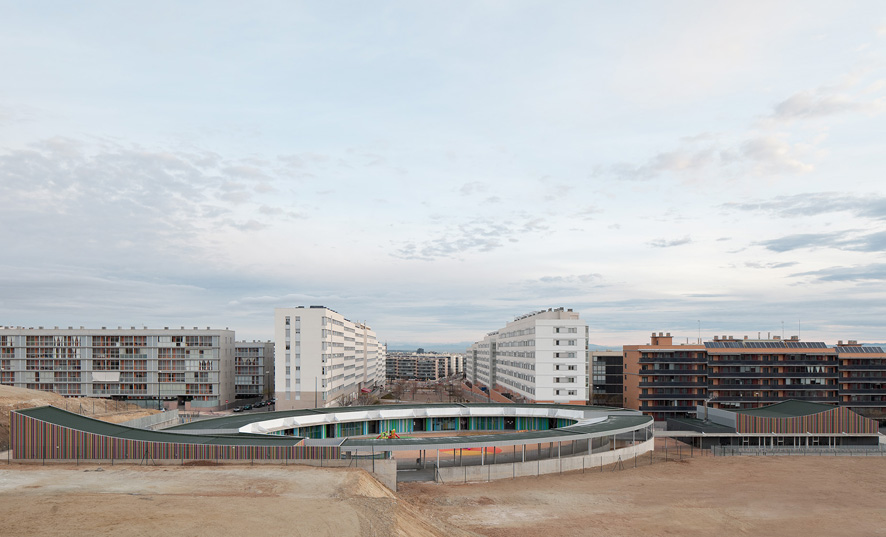 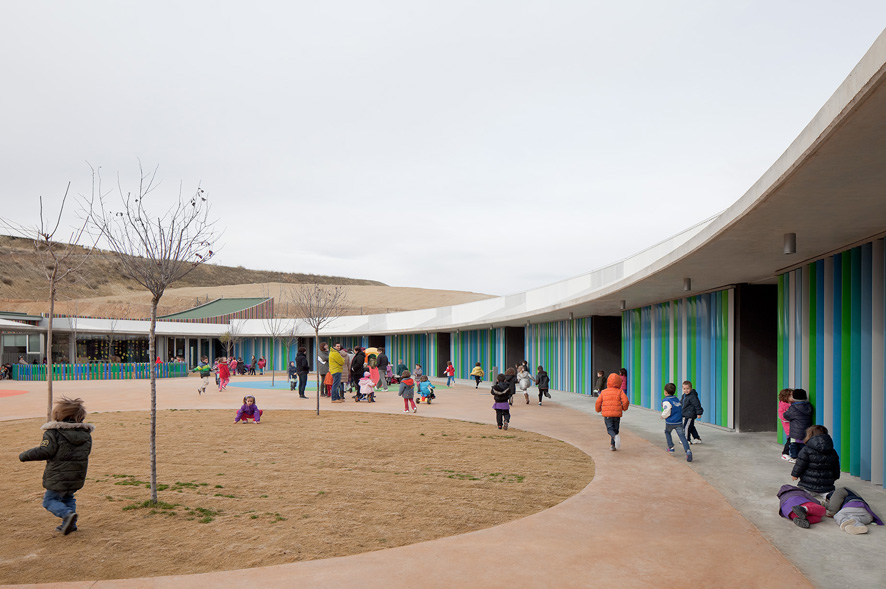 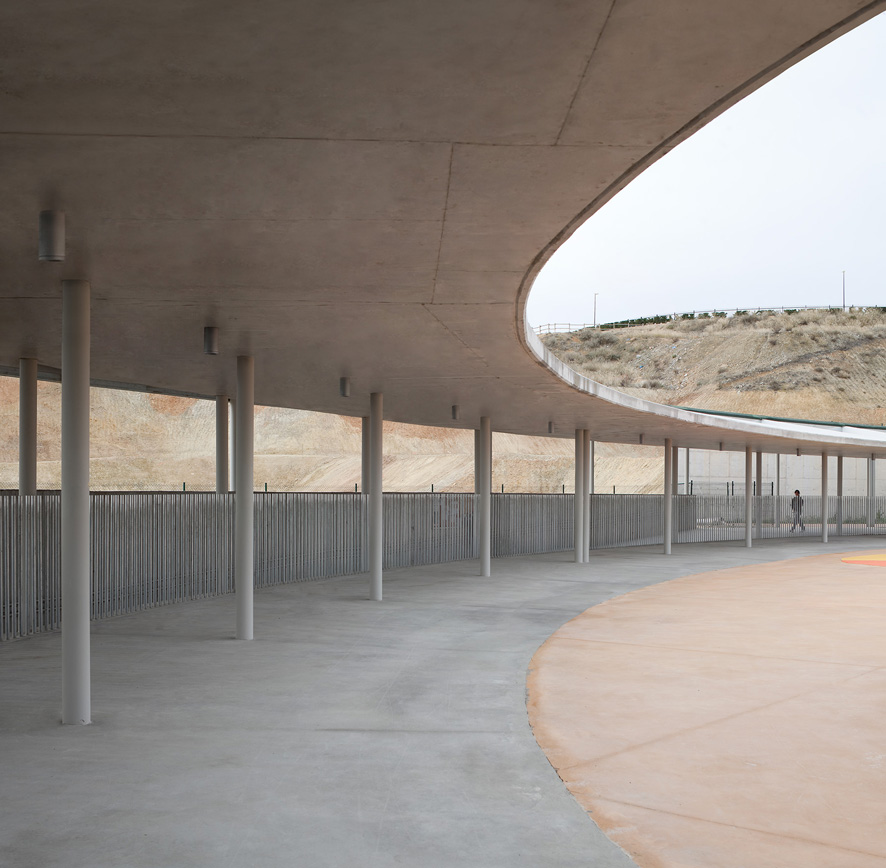 Located on the southern edge of the city, between an area of a ​​recent residential expansion with 10,000 housing and the ring road Z-40, the origin of the project responds to the features of the place –a large area in the urban periphery-,  by the scale and the characteristics of a school for children. The initial plot had a total area of ​​60,000 m², intended for all educational levels, and presented an important difference in height of almost 20 meters, down to the single access road on the north side.

The physical constraints of the site and its particular situation, between the rigorous and repeated volumes of the residential area and transport infrastructures around the city, suggest approaching the project from the capacity of architecture to transform a harsh area into a liveable place, even for children, through  simple and timeless mechanisms of implementation: building a horizontal platform, and defining an enclosed area by setting its limits.

In pedagogical terms, the idea of ​​building a meeting place, capturing a part of the environment to generate a space adapted to the children´s abilities, comes from the model of a central piazza for activities around which infant spaces are articulated, developed in the schools of Reggio Emilia in Italy. These principles about a school around a plaza refer to the notion of a central space, continuous and fluid, without corners, with a curved outline and a free form, which is related to the playful nature of children’s learning. This configuration also provides a friendly and cheerful experience of architecture for the children of the district, in a clear contrast to the strict cartesian order of the linear blocks of the housing area.

The configuration of the playground -around which the classrooms and other spaces are placed- as an open space defined by an oval and concave perimeter, responds both to the idea that the project starts setting a center around which school is organized, and the creation of a courtyard: an independent environment, safe and protected from the outside.

The project is characterized by its horizontality, by the definition of a platform at ground level and the importance of the ceiling, which forms a wide and continuous porch to the patio, structurally supported tensile by cantilever steel beams on the top of the roof. In the courtyard, the roof appears as a continuous, homogeneous and flat profile, with a significant presence, framing the view to the outside, beyond the classroom, as a link with the landscape. Furthermore, the roof becomes the main image of the school from the residential buildings along the street.

The roof raises at the eastern and the western ends, following a curved line, where the interior spaces of the multipurpose room and the dining hall of the school require more inside height. These highest points of the roof feature the profile of the school from distant views and qualifiy its roof, as well as point out the two access points. As the oval shape of the floor, the greater height at the ends of the ellipse also responds to a dynamic conception of the loop-shaped school.

Moreover, on the wavy profiles and curved forms of the roof, children can also find references to slides and recreational forms at playgrounds. The connection to this infant universe also characterizes the physical presence of the building. From the outside, the perimeter of the curved facade is configured by setting colored aluminum tubes in a continuous and seemingly random arrangement, inspired by a set of colored pencils. In contrast to the exterior color display, linked to the character of the building, the interiors offer a more neutral atmosphere, with a small number of materials and abundant natural lighting.

The organization of the interior spaces (classroom, halls, corridors, offices,…) recognizes the different spatial perception of children and teachers. The curved-shaped circulation spaces are visually connected with the classrooms by some circular windows at different heights. Outside, the use of different colors and textures (colored sills, rubber, grass and trees) enables the creation of evocative and varied pavement of the playground for children.

Finally, the design of the project attends to sustainability criteria, that are also present in all buildings of the new residential area, called Ecocity Valdespartera. It has been totally designed and constructed to achieve environmental, economic, social and cultural sustainability, through energy efficiency (decreasing energy consumptions and using renewable energies), decreasing urban waste and emissions and efficient use of resources (water and energy). In the school, the orientation of the teaching spaces ensures optimal sun exposure as much as privacy from the street and the system of adjustable vertical slats facing classrooms allows both solar protection as the blackout. The wide overhanging eaves onto the patio allows for outside sheltered circulation, as well as protects interiors from the summer sun, and the form and the finishes of the roof minimizes its visual impact. Dry-joint construction systems and metal structures decrease the execution time of the construction works and the waste generation, while the underfloor heating and the rest of the technical facilities follow energy efficiency criteria.